Staging a loco service in the shop

What to do with a dummy locomotive - or a beyond-repair locomotive? It can be staged as a unit being serviced. Here is an AHM dummy Alco "1000" (I think it is really a model S3). It is parked on the service track at Bolton Shops. 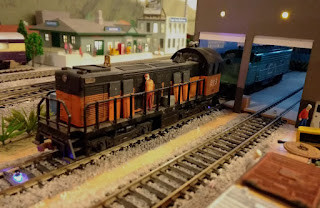 Some of the access doors have apparently been removed for expediency. In reality, the doors are still in place, but have been painted flat black to make them just appear as openings. Four new "doors" have been cut from styrene and painted to match, and leaned against the hood. A workman is posed in position, along with his tool box. And the blue flag lanterns (LEDs) have been set in place foreward and aft.

A similar trick has been used to open some car hoods. See this post.