What to do with that narrow vacant 2" strip along the front edge of the layout? I just buried 69 people (mostly nitpickers) in it. Plots are still available, keep that in mind. Now to mow the grass. 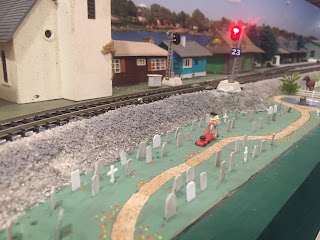 Gravestones are bits of styrene painted various shades of grey, pointed on one end for poking into the Styrofoam base. Crosses are cut out of plastic canvas material.

A block of five background buildings have been planted on the layout. The five shallow buildings along the back are one assembly. They are made from cut up cell phone boxes, faced with mat board, windows made from fiberglass mesh drywall joint tape to give the appearance of individual panes. Lights are LEDs removed from a Christmas tree light string. A 5volt bus runs between the buildings to distribute power for the LEDs. 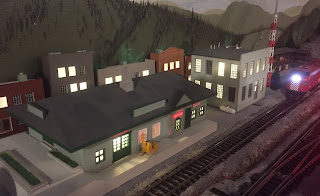 Posted by Rick Mills at 7:34 PM No comments:

Every October, Cape Ann Rotary 902 is pushed up the 3% grade thru Cascade and on to Pamola siding to be staged there for attacking the drifts that are sure to come. Already there are some flurries in the higher elevations. 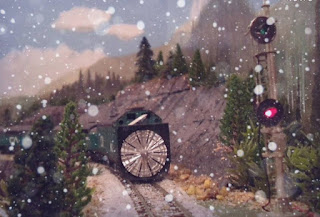 Posted by Rick Mills at 8:51 PM No comments:

It is only October but already snow flurries are in the air as Cape Ann's Acadian crests Cascade Pass at the start of the long downgrade to Sanford, Maine. 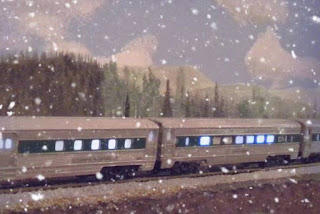 Why do photos of a layout look more realistic than actually viewing the layout? When viewing a layout, the eye is seeing a combination of 3D objects (the models) and 2D objects (a flat painted backdrop, for example). The eye cannot be fooled. The eye sees actual 3D objects in front of a flat background. When you take a photo, the entire scene is converted to 2D, as photos have no depth. Now the playing field is levelled - the flat background has just as much to contribute as the actual models. This is widely used in movies when actors are placed in front of matte background paintings - looks fake in real life, but once on film it is quite convincing. In 1942, when Casablanca was filmed, aircraft were in short supply due to the war - so the final airport scene was filmed in front of plywood cutouts of airplanes. And you can't tell!

It is always surprising what shows up in photos. Photos can be a great modeling tool - by taking a photo on your layout, and then examining it to see what "gives it away" that it is a model and not the real thing, showing you what aspects of your modeling could be improved a bit.

Case in point: I thought this pic of Cape Ann covered hopper 7484 was pretty convincing - until that shiny nickel-silver rail jumped out at me! A brush and some brown paint on the rail web corrected it. Compare before and after. 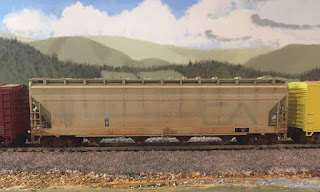 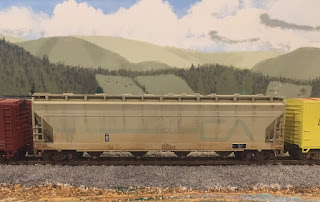 Posted by Rick Mills at 8:11 PM No comments: